About 6 years ago we moved to a different house.  I think I've finally just figured out a cleaning routine for it!  I had the old house all figured out and timed, but that was when I had just 2 kids, and not 4 who make much bigger messes.  I always feel like I'm ALWAYS cleaning, but there are ALWAYS more messes, and I can never keep up.

I'm all for having kids help with family work, but I've had such a hard time implementing it.  I've also been kind of anti-Saturday chores because they just get in the way of other plans.  However, I've been converted, and Saturday chores are the answers to all my cleaning problems!

If you're like me, you want the house cleaned the way you want it.  You don't want a sloppy job on the mirrors and windows, you want every spot off the counter, etc., BUT, you also don't want to micromanage your kids and make them feel bad about the work they are doing and trying so hard to do right.

I also like the house clean for Sunday, which necessitates cleaning on Saturday.  But, once the weekend is over, the house is a disaster on Monday.  So, I've started cleaning the house during the week like I've always done the way I want it, then I have the kids somewhat re-do it on Saturday to their ability.  That means it's kind of getting done twice!

During the week, I get the counters and mirrors to my standards, then on Saturday, they do the best they can with them and it's good enough for Sunday.  During the week, I vacuum, but, yes, it needs to be done more than once (really every day, but that's not going to happen at this house), so I let the kids also do it Saturday.  Win-win!

Because I'm trying to keep the basics under control like laundry, dishes*, bathrooms, kitchen floor, it doesn't leave a lot of time for baseboards and walls and light switch cover plates and chairs and kitchen table.  Bam!  Kid Saturday jobs!  Now I may have done those once a year before (I know, gross), but if the kids are wiping a couple things down each week, even if they don't do a great job, those things will surface to the top of the list again in a few weeks.

My oldest kids are getting roughly 3 jobs a Saturday, and the younger one, one or two, so they really don't complain.  If they do, I remind them that we're a team and if they want to go out and do activities, which take time, then I need their help around the house.  Now, if someone has a Saturday activity, like our 10-year old did last week, I just made up the list early and let him do his jobs on Friday.  Really, Friday jobs would be fine rather than Saturday, I'm just not quite pulled together with my list by then, though.

I asked some ladies when life starts to get easier a little over a year ago.  They said when your oldest is 9.  My oldest was about 9 by then, and I do think it started getting easier.  However, now that he's 10, it's getting even better.  For me, I don't think having the kids help this much before age 9 would have really helped me.  It probably would have made me more frustrated.

My friend recently posted this cleaning expectation chart on Facebook, that I thought was good.  Of course we all have our own variations, but it's something to start from. 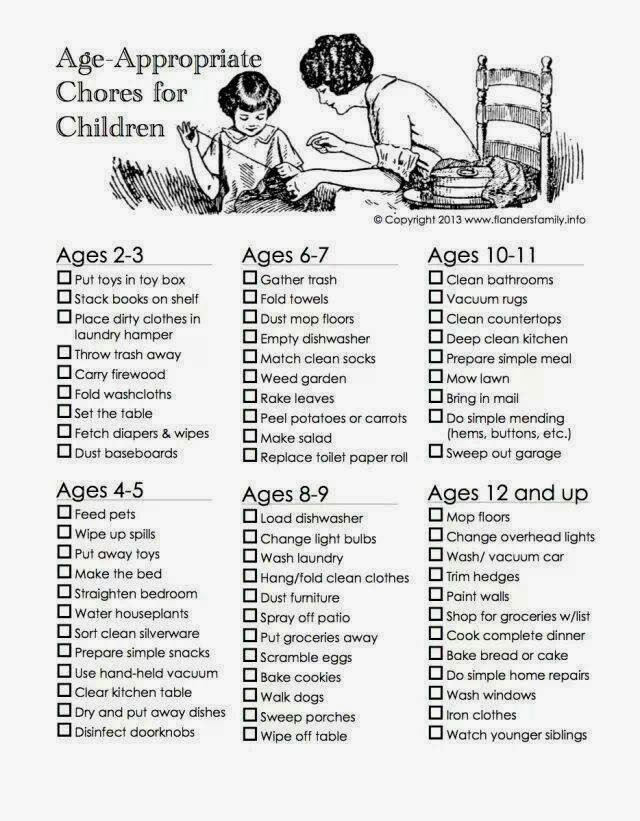 There was recently a post about how one mom keeps her house clean.  Honestly, it made me feel pretty lousy because some of her monthly stuff was my yearly stuff; her weekly stuff was my monthly stuff; and some of her stuff wasn't even on my list.  I thought it was good in theory, and it reminded me of things I need to also do, but I can only do so much, and that's okay.

*I would have the kids help more with the dishes, but we have these super-sensitive cabinets that the finish is coming off of, and I know it will only be worse if I have little helpers.  Gotta figure that one out.

Posted by Emily at 3:00 PM 2 comments: Links to this post