We Are Our Mothers' Daugters 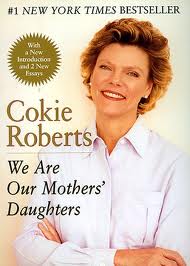 I just finished We Are Our Mothers' Daughters by Cokie Roberts.  I've been meaning to read this book for a long time now.  It came out in 1998.  That's 12 years ago -- when I finished college!  I've always loved Roberts' research on women.

I was amazed at the wonderful stories of strong women she shared; I was uplifted by Roberts' inspirational writing.  I was convinced that we women need to work better together whether we work outside the home or not.  I was reminded of my friend's saying, "We're all just doing the best we can."

The experiences of women she shared were inspiring.  They were stories of women who have made a difference in the world.  The things the women changed were things that needed changing, and they were things women generally care about more than men (nutrition labels on food as an example).

But part of me still has to wonder if these women who have done all these wonderful things outside of the home could have also done amazing things inside the home?  I'm sure they did that, too, but could it have been even better?  I also felt that God was left out of the picture.  Roberts book makes a lot of sense if you leave God and His plan for us out.

Roberts suggests that while children are small, it is important to be home, maybe not full-time, with them.  She also mentions that because she worked, she was a better mother (189).  And I get that.  It just also tells me that we're training up our young women to need fulfillment outside the home.

Roberts' mother worked along-side her father -- and you can see how that influenced Roberts in how she lives her life.  It is neat to see what we gain from our mothers just because of their examples.  Interestingly, I learned at BYU's Education Week this last summer that genetically women get pretty much all of their DNA from their mothers.  I've tended to follow the traditions of my father's family for some reason (European/American), but after learning that my core makeup is really after my mother's,  maybe I ought to learn more of her heritage  and traditions (Scandinavian).  If it worked for those women for hundreds of years, maybe it will work for me. . . .

I do like how she mentioned that the Internet may help women find a social network without leaving home (remember this book was written in 1998.  I'd only used the Internet for the first time two years prior!).  Three cheers from me for the Internet!!!  I find much satisfaction in the contributions I can make through the Internet.

Roberts mentioned someone stating that housework is not hard, just lonely.  Amen!

She also said staying home with children is a worthy way to spend a life, but it just wasn't fulfilling for her. She seemed tickled to have a wonderful husband and children and also enjoyed running the house the way she liked.  She always thought of herself as a mother before anything else.  It was nice to see the respect from her for the stay-at-home mom.  For her, there's not the debate between the types of moms.  I think that's a good thing.

This was neat, too -- she grew up Catholic, her husband Jewish.  So, what did they do with their children?  They raised them both religions.  What a novel idea!  She said it got pretty crazy around some seasons of the year, but it was worth it.

In conclusion, Roberts suggested women CAN do it all, just as women have done for generations, but we'll be tired.

I enjoyed this book; although, I didn't completely agree with it. It gave me a nice perspective of the working mother and reminded me of all the awesome contributions of women.  I believe women should have the right to participate in society just as anyone else, but I'd hope more would choose to stay home.
Posted by Emily at 10:58 PM 1 comment:

Teaching the Doctrine of the Family

I read "Teaching the Doctrine of the Family" by Julie Beck last night.  Wow.  She hit the nail right on the head.  Wow again.

She started off the talk mentioning how she'd asked young people why their education is so important.  She got many replies.  Anything from it's "the key to success" to a way "to meet other great . . . youth."  The answer that was strongly lacking was that of, "So I will someday be a better family leader."  She goes on:


Family is rarely on their minds.  Their responses are generally about self, and of course we know this is the time of life they're in.  They're living in a very self-interested time of life, but they aren't thinking about family.

Julie Beck points out that the youth are surrounded by "evidence. . . that the family is not important."  "They don't see forming families as a faith-based work."  She says "They are being desensitized about the need to form families." The youth are bombarded with messages of "You are the one who will get yourself ahead.  It's because of your skills and intelligence that you will be successful."  It's not about God and family, it's about you.  We need to make sure they know it really is about God and family.

This all reminds me of when I was considering going to graduate school.  I was counseled in filling out my applications:  "Don't write how you think this program will help you be a better mother (or father) because that won't help you get in."  But wasn't that really what my end goal should have been --  my future family?  I wasn't doing this to further my career (what career? I really didn't want one anyway -- I didn't want to get set on one that I'd have to eventually give up).

Family.  The core of LDS theology (summarizing Julie Beck):  If we believe that the glory of God is "to bring to pass the immortality and eternal life of man" (Moses 1:39), meaning being connected eternally as families through the priesthood ordinances found in temples of Christ's restored church, then family has to be our main focus so we can fulfill the glory of God and not "utterly waste" the creation of the earth (D&C 2: 1-3).

The Fall provided a way for the family to grow. . . in numbers and grow in experience. . . . The Atonement allows for the family to be sealed together eternally. . . .  The plan of happiness and the plan of salvation was a plan created for families.  I don't think very many of the rising generation understand that the main pillars of our theology are centered in the family.

You know how the question, "What Would Jesus Do?" had it's little fad several years ago?  I mean it's a good thing to ask yourself, but it did have a popular time there.  Similarly, over the last year or so when trying to answer a question, I've also considered, "What does this do to the family?" or "How does this affect the family."

By applying that question, you can see why the LDS Church answers the way it does concerning gay marriage, immigration, or other topics.  If the issue doesn't promote families, you can bet the LDS Church will not be in favor of it.

Anyway, awesome article.  Thanks for sending it along, Bridget!
Posted by Emily at 8:26 AM No comments: