The Women's Movement in Early Utah

A week ago I listened to a radio program on Eliza R. Snow.  In it, the commentator and Jill Derr were speaking of Eliza R. Snow and Emeline B. Wells in the late 1880s, and quoted Emeline as saying "Relief Society will help women's emancipation from error, superstition, and darkenss, etc., will bring educational and economic opportunities to women." The program host then asked, "Where did [Emeline] come up with these particular concepts?  Was it the [original Relief Society] minutes or something more along the lines of women's rights?" (minute 44:46).

Jill Derr answers that she believes it was, at least in part, a result of Emeline's life:  Emeline was married at 15, a mother at 16 and deserted by her husband, later married two more times, and during her life had to support herself.  You can understand why Emeline was a supporter of women's rights and suffrage because she saw that women needed the ability to care for themselves when life gave them lemons.

After that part in the program, the commentators talked about how women in Utah had the vote in 1870, lost it when the government felt Utah had too much voting power, then received it again in 1896 when Utah became a state.  They suggest that it was easily acceptable for women to have the vote in early Utah because women naturally voted in church affairs, so why shouldn't they in civic?

Women in early Utah are so fascinating to me.  They had a different culture than the rest of the United Sates; they were quite liberated in many ways.  I'd continue to like to learn more about:
Any suggestions on where I can learn more? 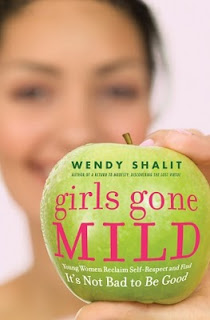 I just finished reading Wendy Shalit's Girls Gone Mild (or in paperback: The Good Girl Revolution).  Shalit focuses not only on modesty, but on the influence of pornography on our society and our relationships; sense of self, dignity, and altruism; friendship; bullying; and feminism.   In a nut shell, Shalit says maybe we can make the world a better place by being nice, good, and virtuous.  She still uses some pretty explicit examples throughout, which I hope are not the norm, but they do help her make her point.  It seems to be written for a younger audience (maybe high school), versus a college audience in A Return to Modesty, so it's an easier read.

On Friendship (chapter 5)
On Feminism

I didn't find the book as amazing as I found A Return to Modesty, probably because the topic wasn't so new to me anymore.   I don't know that you need to read both of Shalit's books, but one will broaden your perspective on modesty.
Posted by Emily at 9:09 PM No comments: Links to this post