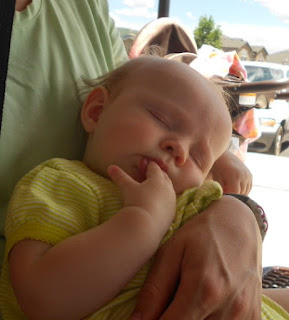 I just might be on the verge of getting more sleep, but I've found these interesting when in my sleep-deprived state:

"The effects of sleep fragmentation are similar to the effects of reduced total sleep:  Daytime sleepiness increases and performance measurably decreases.  Among healthy adults, only one night of sleep fragmentation will produce decreases in mental flexibility and sustained attention, as well as impairments of mood" (Healthy Sleep Habits, Happy Child, Weissbluth, 1999, 35).

"It's been known for many years that the effect of lost sleep accumulates over time.  When you constantly have insufficient sleep, the sensation of sleepiness when you should be awake increases progressively. . . .  When adult volunteers have their sleep shortened by a constant amount, you can measure impairments in their mood and performance during the day.  If the sleep disruption is repeated night after night, the actual measured impairments of mood and performance during the day do not remain constant.  Instead there is an escalating accumulation of sleepiness that produces in adults continuing increases in headaches, gastrointestinal complaints, forgetfulness, reduced concentration, fatigue, emotional ups and downs, difficulty in staying awake during the daytime, irritability, and difficulty awakening.  Not only do the adults describe themselves as more sleepy and mentally exhausted, they also feel more stressed. . . " (Healthy Sleep Habits, Happy Child, Weissbluth, 1999, 47).

"Western industrialized societies have such high numbers of sleep deprivation that what is abnormal sleepiness is now considered normal" (from our mechanic's newsletter -- go figure).

It's amazing we mother's survive.  But, it must not be that bad or our Heavenly Father wouldn't have made it that way.  He wouldn't have made it so bad that His Plan would be frustrated by moms passing out left and right, but just hard enough that we could figure out a way to make it all work out.

9/18/12 Update:  I've finished the sections in Healthy Sleep Habits now that I've wanted.  I've quite enjoyed the book.  I really like all the scientific research on sleep at the front of the book.  Healthy Sleep Habits has some differences compared to The Baby Whisperer and Baby Wise, but overall, it's the same idea. One major difference, however, is that Weissbluth does say it's okay to nurse your baby to sleep; whereas, the others don't.  He also says babies actually can't sleep long periods of time before 3/4 months because their bodes are lacking the chemicals to sleep that long.  (i.e. Sleep training really won't work before that age.)  He also says it's okay to still be feeding a baby up to 2 times a night by 9 months (I think it was); the other books lean toward 10-12 hours of sleep without feeds earlier than that.  Because I know my kids have started sleeping 10-12 hours a night from around 3/4 months without feeds, I know the other methods work, or at least encourage babies to sleep longer.  This baby #4 is tougher and the methods do help, but I think Weissbluth's book is a bit more realistic in what actually happens with a baby.  So, I'm shooting for a balance between the different ideas.  Now, I need to go buy myself a copy!
Posted by Emily at 9:30 PM No comments: Links to this post

Email ThisBlogThis!Share to TwitterShare to FacebookShare to Pinterest
Labels: Sleep

My friend, Michelle, at Mormon Women fairly recently created another site called Hope and Healing -- Pornography Addiction Education and Recovery.  She felt this was necessary when she began getting a large amount of traffic about the topic of pornography on her site.  Not only did she create an informative site, she also created a forum where affected women can talk.  She writes,


I felt like I needed to create a separate space where they [wives of addicts] could find information and connect with women who had walked this path (fortunately, there were several women who were willing to help reach out to my readers). I know this is a topic we all don't want to think or talk about, but we are past the point where we have that luxury anymore. Please, get educated. If you are a parent, your kids need you. And there are probably people in your sphere of influence who need support and help, too. There are many great resources that are out there to learn more. We're trying to share them here. And if you know of a wife/ex-wife/girlfriend of an addict, let them know about this. They'll find an amazing community of women who are willing to reach out and give them some encouragement.

So, I just wanted to spread the word about this resource because, as Michelle said, "we are past the point where we have that luxury [not to talk about pornography] anymore."

Posted by Emily at 8:50 PM No comments: Links to this post

Email ThisBlogThis!Share to TwitterShare to FacebookShare to Pinterest
Labels: Pornography 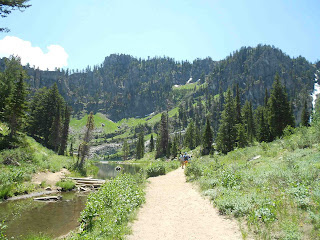 Recently, we took a family vacation.  In some ways I've struggled with the last several vacations because, basically, I didn't get one.  As the mother, you know, it's just not all that relaxing.  You're still taking care of everyone and probably sleeping even worse than normal considering you're not at home in your own beds.  When you get home, you still feel like you need a vacation.

Anyway, on this last vacation, I considered beforehand that if I didn't think this was a vacation about ME and MY relaxation, but about sharing experiences with my kids and creating memories, then maybe the whole thing won't end up an exhausting disappointment.

You know what?  It worked!  Now, don't ask me why I didn't figure this out about 9 years ago.

(Sometimes I do wonder why I didn't catch this concept earlier.  When I did my student teaching in Western Samoa, I longed to share those experiences with my family (parents, brothers, sister).  Now I just need to remember that I'm here to share the joys of this life with our kids.)
Posted by Emily at 10:56 AM No comments: Links to this post