a vote for Evan McMullin [third party] makes a statement that we believe in values, liberty, integrity, and don't have to be subject to the political corruption of inferior candidates and the two party system.
If you've been brainwashed into the logic that a third party vote is "a vote for Hillary, a liberal supreme court, and killing babies. . . "-Alan B.


Anyway, after all was said and done, I got the feeling that we're still not ready for women to have too much power. I suggested that initially on a Facebook comment only to be shut down. At first I believed Hillary didn't win merely because she was "Hillary" and that people are sick of the system and they want to change it, but when I heard that certain states that have voted Democrat since 1988 flipped this year to vote Republican, it struck me that this was probably a bit of a case of sexism.

In the same thread, someone suggested that the votes taken away from her because she was a woman were probably also given to her by others because she was a woman, so it probably balanced out. Hopefully true, but still not right. When can we start voting for people for what they think rather than what party they represent or what sex they are?

Someone also suggested that Condoleezza Rice should have been the one running, and that she would have won, but I dunno. There's still that hierarchy of White Man, Black Man, White Woman, Black Woman. Condoleezza may not have had a chance.

I didn't vote for Hillary, but absolutely expected her to win because I felt she was made for this (at least that's how I expected others to view her based on her experience (watch Frontline's The Choice)---I'm personally not a fan of her secrecy and her (anti)family policies; I vowed years ago to NEVER vote for a Clinton), but I figured others would look at her professional experience and see she was fit for the job.

I wonder what would have happened if it was Bill running against Trump. I view Bill the same as Hillary. Getting Hillary in would be like getting Bill back in and Bill and Trump are nearly equivalent in their morals, but Bill has much more political experience, so why didn't Hillary win?

I'm feeling that because she lost, it sends the signal that women aren't supposed to be in power. It's ok for one to be the queen because she's kind of just a pretty little puppet and someone else really has the power. It's ok for women to advise, but just not be the Commander in Chief. I think people are afraid to give a woman too much power.

Anyway, maybe I'm wrong, and I am concerned about a Trump presidency; it makes me sick actually, but a few people gave some interesting and even consoling words on Facebook:


1) After scrolling through FB to see what people have said on this surprising election day, I'm inspired most by the fact that PEOPLE. VOTED. There were many who did so reluctantly but who showed up anyway, and many had experiences (seeing someone vote for the first time as a new U.S. citizen, being in the same room with people of different ages, socioeconomic statuses, beliefs, etc.). I got a little choked up when I saw that long line outside in the cold in a city here that lingered well beyond 11 p.m. Someday I want my epitaph to say "Just show up." Americans showed up today and that inspires me.
The upset has most people stunned, but it's a stunning reminder that the process of voting MATTERS. It can do surprising things.
2) I really, really hate the fact that Mr. Trump was so brazen in the way he campaigned. This is the main reason I didn't vote for him. He left a lot of damage in his wake and I'm seeing that in my feed, too.
But I plead with those who feel this is so personal to not turn the energy around to rhetoric the other way. Trump won for reasons that even the experts will struggle to figure out. I can't believe that somehow "America has spoken" and said that blacks don't matter or sexual violence is ok, and I think we would do well not to go there, because I think it will only make it harder to continue to unite against such things.
I think this election speaks to a complexity of our world, and speaks to a different kind of pain that many who often have no voice at all felt this election. (The stunned acceptance of the way the rural vote dominated this election is a key something that will linger in my mind for a while.)
I care deeply about the pain of those who feel the sting of his racist rhetoric. I mourn with those who have been sexually assaulted and feel this is a huge backward step in the cause to take a stand against it. There is no other word to describe his methods but "offensive."
AND I also have to hold space for the "silent voters" whose voices were heard through this historic election...people who wanted dramatic change because of their personal lens and experience. *All* voices have to matter if empathy and humanity are to prevail.
It's an awesome invitation for us all to step into. Here's to forward.-Michelle L

***
Surprisingly, I have a great feeling of peace and hope this morning. I didn't vote for Donald Trump. I don't like him. I have never felt compelled to trust what he says about his policies. But now we will get to see if he was telling the truth.
Perhaps this feeling of peace and hope stems from the fact that there is a chance he might have been telling the truth. He might actually implement some conservative policies. With a Republican House and Senate, Obamacare might actually be repealed. Immigration might be reformed. The President might actually appoint conservative Supreme Court judges. Maybe we'll even get a balanced budget.
I knew we would get none of those things with Hillary Clinton. We would have been fine if she won, but I know I would not have woken up feeling the way I do now. We knew what to expect with her.
To President-elect Trump, the Republican House and Senate, I say...
DON'T SCREW THIS UP! -Joe S.
***
I am more shocked at how people are treating each other than I am that Trump is President. Why is the solution to turn against each other? Name calling, crass words, belligerent attitudes are not going to change the outcome. I do not like Trump-at.all, but if you treat people the way he does, you're no better than him. Remember who you are, your own integrity, what you yourself stand for. Treating others as Trump would treat them, isn't going to fix this. In the words of Ellen Degeneres, "Be kind to one another!" -Kate L.
***
I am so.....shocked maybe? That there is that much hate in America to elect a barbarian. I see your posts of make America great "again" and I wonder what time you would like to go back to? Slavery? Pre-women's votes? Segregation? Vietnam? It will be the first time in my life that I cannot have respect for the person in office of President. I am completely ashamed and disappointed.And a little happy that by his standards I wouldn't be "beautiful enough" to violate.Everyone says move on, get along, but I am too disgusted with the American people today. - Kim P.
***
Today I've been thinking about the promises in the Book of Mormon that our land would be blessed if we are righteous. I wonder if God's hand of protection is being lifted if through trial we, as a whole, will be brought to humility. Remember what it was like after 9-11?

While painting rooms in the house recently I've listened to the end of the Book of Mormon and have been struck by the downfall of people and the parallels to our day: 3rd Nephi (before Christ comes), 4th Nephi, Mormon, Ether, Moroni. I've also been struck by 2 Ne 28, Mosiah 23 and 29  and scriptures in Alma 2.

Mosiah 29:27
And if the time comes that the voice of the people doth choose iniquity, then is the time that the judgments of God will come upon you; yea, then is the time he will visit you with great destruction even as he has hitherto visited this land.

4 Ne 1:24
...there began to be among them those who were lifted up in pride, such as the wearing of costly apparel, and all manner of . . . fine things of the world. . . . And they began to be divided into classes; and they began to build up churches unto themselves to get gain, and began to deny the true church of Christ.

2 Ne 28:5
And they deny the power of God, the Holy One of Israel; and they say unto the people: Hearken unto us, and hear ye our precept; for behold there is no God today, for the Lord and the Redeemer hath done his work, and he hat given his power unto men;

I'm out of time to find more. I'm sure Google will know.

Interestingly, Mormon 5:23 says "Know ye not that ye are in the hands of God? Know ye not that he hath all power. . .?" Maybe it's not so much that women don't have power in the United States, but that men have too much. Maybe we all, men and women, need to be seeking to be kind, humble, and serviceable and not worry about who has the power. In fact, shouldn't our leaders be be of the highest caliber and the most serviceable? Remember back to the President Benson lesson 19 on leadership? The characteristics of a leader were all of a humble nature: humility, spiritual strength, knowledge, loyalty, unity, and love & expression of confidence.

Can we please turn back to character and integrity? 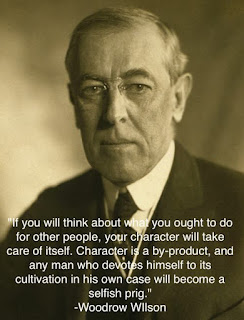 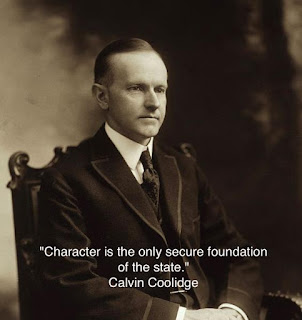 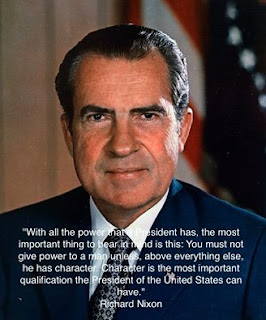 (Yes, even Nixon knew it. And John Adams sure had some good ones,
but I never got to make up the pics.)

Anyway, this post is getting away from me. I've got to get back to real life. I turn back to the concept that I can only control myself and influence my family, so that is what I will do: fortify myself and my family and hope that our new Commander in Chief will keep his word. 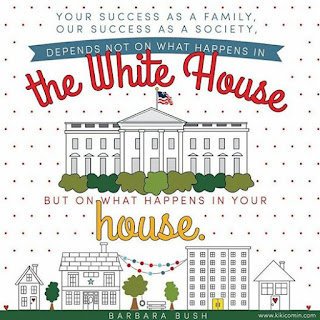 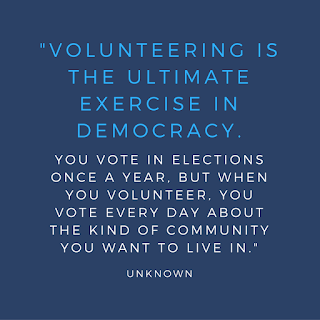 Posted by Emily at 11:14 AM No comments: Links to this post