The Part of Life We Call Death 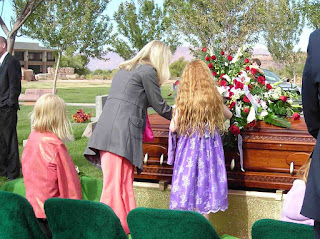 After the tragedy yesterday in Connecticut, of course my first reaction was to hide, keep my children inside forever, and even homeschool them.  I also again had the thought that is's a wonder that we actually live each day, rather than die.  I'm serious.  This will sound really pessimistic, but there are so many things that could kill us.  I think the first time I thought of that concept was a few years ago when I'd heard of some car accident.  Just the other day on the Today show there was a story about when someone is threatening to drive home drunk, most people let him or her.  Women protest it more than men, but in the end, the drunk drives.  In addition to the shooting, there was a stabbing of 22 children and their teacher in China yesterday. A couple weeks ago my not-yet-retired neighbor died of a massive heart attack.  He was healthy and fit.  Any one of us could get cancer or some other disease and die.  In so many ways, it's a miracle we're alive every day.

So how do we not fear death?  I think the first thing we need is an understanding of the Plan of Salvation and specifically that there is life after death; we need a testimony that we will live again.  We need to know that death is merely a passage to the other side, just as birth was a doorway to come here.  Perhaps we were just as nervous of birth before we experienced it as we are of death.  Maybe once we die, we'll realize it's not such a bad thing after all.  If we thought of death as a baptism where going down under the water might be a little bit scary, but coming up out of the water was the most beautiful cleansing thing, we might not be so fearful.

I'm again recommitted to teach my children the Gospel of Jesus Christ so that they will be prepared when their time comes.  I'm determined to help them not fear death, and as a mortician's wife once told me, to make it a part of life.
Posted by Emily at 9:53 AM 3 comments: