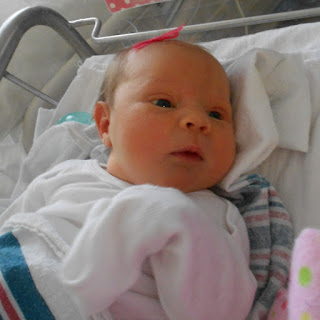 (OK, honestly, I'm not feeling very empowered at the moment, I'm feeling rather exhausted, but I wanted to put up this post anyway.)

I had a baby just over a week ago. She's a little doll. I chose to have this one "naturally," or I'd prefer to say unmedicated -- natural just doesn't sound quite right to me. My #3 was also "natural," but that was by accident. It wasn't as bad as I thought it would be that time, so I thought I'd try it on purpose this time (I did get nervous about the choice and semi-seriously considered getting an epidural). There was just something about feeling the birth of a baby that is so real, so powerful. It made me feel so incredibly strong, so incredibly sacrificing.

After I had the baby, I typed up the entire birth story, embarrassing things and all, and put it on Facebook. I was shocked. I must have felt pretty good about myself and the whole experience or I wouldn't have done it. I suppose I'm over being shy about the whole birth thing. There's nothing to be ashamed about. It's birth! It's life! It's sad we don't talk about it more and teach women what a beautiful thing it is -- all the details. I'm happy especially now to see efforts such as those in The Gift of Giving Life.

Another thing that actually made me feel proud of my post-pregnancy body was an image someone recently posted on Facebook of a woman's middle, including stretchmarks. The caption was: "Your body is not ruined. Your a ... tiger who earned her stripes" [profanity omitted]. Heck yeah I am. Now if we looked at it that way, we all might be a little more content with these bodies that don't look like teen-age anorexic model bodies.

A last thing that made me feel pretty empowered about being a woman and bearing children was triggered by something I saw on PBS. I turned the show on while nursing or something and it was about the early Puritan women who helped settle our country. I wish I could remember the name of the show or the woman/women it was specifically about, but it's a bit fuzzy. The show mentioned how these early women were valued for their ability to bear children. Children were critical for the survival of the colonies -- both to help with work as well as to be a propagation of the species. The woman the show was mostly about had borne 10 children and was highly valued for her ability to do so.  I think there's a lot to learn here.  Imagine if we valued women for their abilities to reproduce, and also valued children for their ability to help out and be productive, not to be a drain.  Interesting. 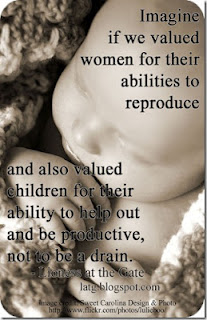