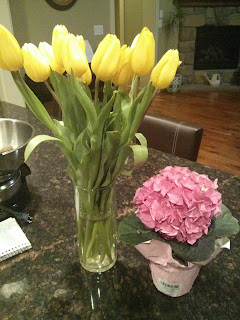 When my mom turned 40, two of her friends took her to lunch. One smuggled in a dead plant and put it on the table as the centerpiece. I remember 40 for my mom vividly, yet I really didn't understand why it was kind of a big deal. I mean, it wasn't a big deal to me: she was just mom.

After moving cities, then having a baby and staying much in seclusion the last four months, I've been a little worried about 40. Would anyone remember me? Would anyone even know it was my birthday? Usually birthdays aren't that big of a deal, but 40.

An older, single friend posted on Facebook how she prayed big and specifically. I decided that I guess I could do that, too. I prayed that friends would take me out to lunch; that's all I wanted for 40. I was afraid it wouldn't happen and wondered if I should drop a hint to my husband. I mentioned it, but I don't know that he'd take action on it.  I mentioned it to my mom.

Probably within a week after my prayer, my Visiting Teacher texted about meeting at a park so our daughters could play. Within an hour she texted again and said, "Your birthday is coming up! What if I bring you lunch and we can hang out at your house? Would that be easier with the baby?"  Four days later she messaged again saying two other gals wanted to come!

Not only did all these women bring lunch, they brought flowers, a card, and that crazy, amazing Costco chocolate-mousse-tuxedo-whatever-it-is-cake.

I could not believe it. Although I prayed to go to lunch, it was definitely easier to have people to my house considering the baby, the preschooler, and my two older girls are off track. I have to say, my Heavenly Father knows my needs before I do, and I thank Him for an in-tune Visiting Teacher. Wow.

Now, here's the works part. I said I mentioned it to my mom (works). After I heard initially from my Visiting Teacher, my mom asked if she should call some of my old friends and you know, put in a word. I told her, "I dunno" as I already had some new friends coming over and I really didn't want to beg for birthday wishes.

The day after we had this little conversation, I got a text from an old friend wondering about getting together for lunch for my birthday. After some planning and replanning we will be getting together with a bunch of friends, so that will be nice.

I just find it so interesting that this single situation was both answered directly in faith as well as in works. Faith, in that my prayer was directly answered without any human meddling, yet it was also answered through the works of humanly angels.

Yup, God does answer prayers and I haven't been so spoiled since I lived with my parents!

UPDATE: So I asked my husband if he had anything to do with my Visiting Teacher coming over after I wrote this last night. I can't remember exactly what he said, but it was affirmative. Now, that may spoil the faith part of my post, but just knowing that he was sensitive to my wants caused tears to come to my eyes. My husband isn't the sensitive type and like I said, I didn't expect him to do anything, so this was a BIG deal that he cared enough about my feelings to actually DO something!

I guess it's kind of like the miracle of the seagulls. When I took Utah history at BYU, I learned that the seagulls actually came every year to eat the crickets in the SL valley, so it really wasn't a miracle, was it?  BUT, the Mormon pioneers didn't know it was a common occurrence, so it was still a miracle to them.

UPDATE AGAIN: My Visiting Teacher had been planning to do something special BEFORE my husband even contacted her. :)

Posted by Emily at 9:51 PM No comments: Links to this post