On Sunday I had the opportunity to teach the Joseph Fielding Smith Chapter 12 lesson on the Oath and Covenant of the Priesthood. Of women I've talked to, I don't think many were excited to teach such a lesson, but I was excited for the challenge as the priesthood is something I'm always trying to better understand. This lesson gave me the opportunity to really begin studying again some things I started studying a while ago.

As I began studying, I first needed to remember what the offices of the priesthood were. Then, I needed to figure out do all offices/officers hold keys? Are all offices part of a quorum?  What exactly are priesthood keys?  I wanted everyone to be on the same page with our basic understanding of priesthood organization.  After a lot of research, and coming up with more questions, and even more completely realizing the overlap and layers of the priesthood organization, I came up with the following chart/handout. I believe the information on it is accurate; however, I cannot confirm that it is complete. 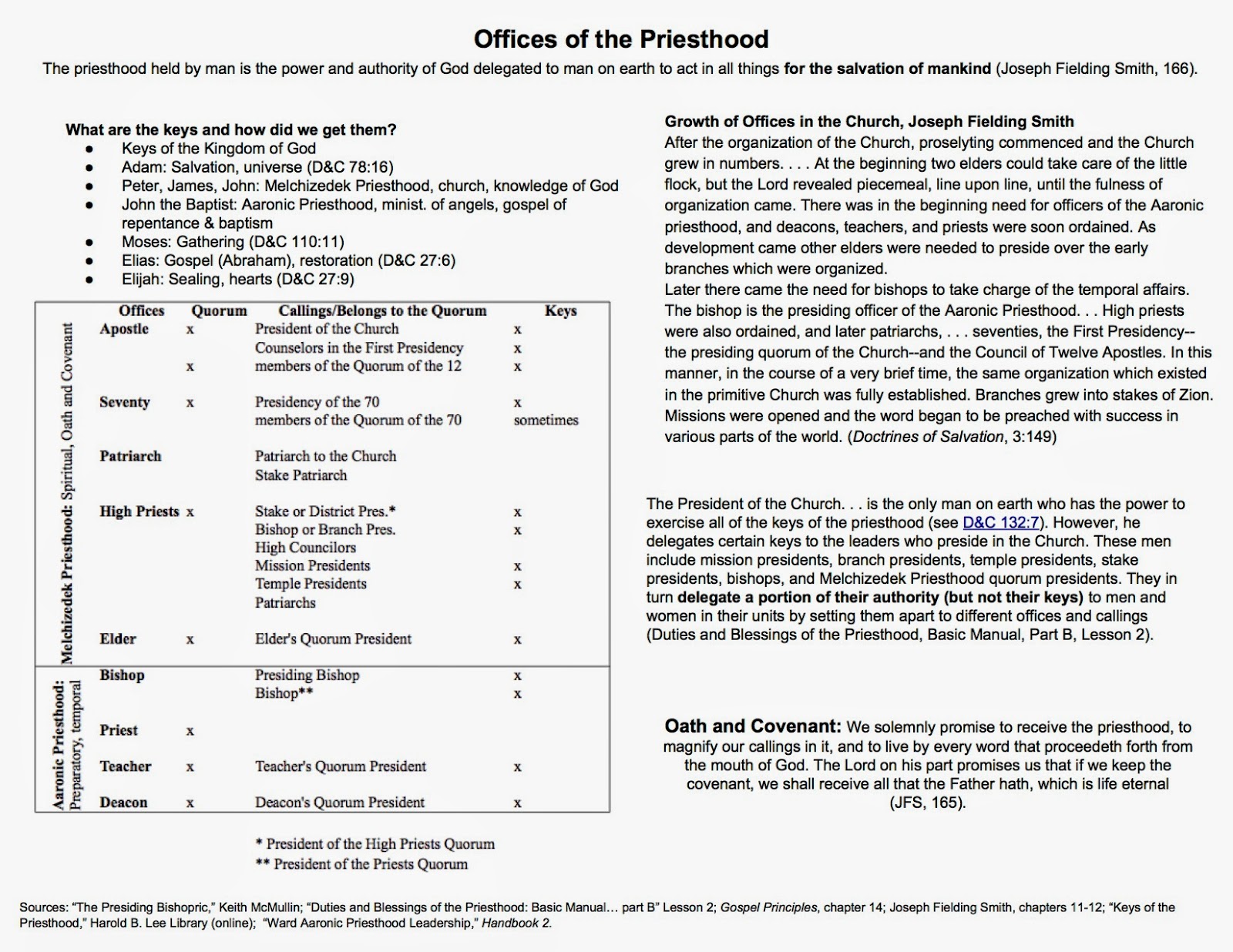 Teaching the class was a SUPER experience. I received at least three answers to questions I had while teaching the lesson. I also realized that probably most people are just as confused as I am about the priesthood, which is why so many people are so intimidated when it comes to teaching a lesson about it.

Probably the most significant thing I learned, or at least I need to look into more, is concerning spiritual gifts. We read a quote in the lesson regarding what priesthood holders are to do; it mentioned 5 things:

I pointed out that we, as women also do these things, and we talked about examples. I wanted to be sure that women were comfortable with particularly the "heal the sick" point as it's not something we see a lot of in our day.  I mentioned how in Moroni (10:11) healing is a spiritual gift and if it is your gift you can use it. We clarified it is not a priesthood blessing with the laying on of hands, but an act and prayer of faith. One gal raised her hand (who told me later that she feels she has the spiritual gift of healing) and mentioned that the priesthood gives men the right to call upon whatever spiritual gift they need when they need it, thus, giving people more access to God's power more of the time (I added that last part).

That is when the lightbulb went on in my head. A few years ago we watched Faith like Potatoes. In the film, the main character raises someone from the dead. I experienced some cognitive dissonance because how could a non-priesthood holder heal or raise someone from the dead?  However, now I realized that if that is his personal spiritual gift from God, and all people have spiritual gifts, then of course it's possible. But, the priesthood allows more access to those spiritual gifts that may not be bestowed upon an individual. Now, I've never read anything that confirms this, it just made a lot of sense and I want to look into it further.

Because of the lesson, I want to study more about the different dispensations and what keys were present during those dispensations. There were more questions, but I'm too tired to remember.

The main points I wanted to leave with the sisters were that the priesthood is the power of God on the earth for the salvation of mankind. It's not just His power, it's His specific method to get his sons and daughters back. After doing initiatories the night before at the SL Temple, I also felt impressed to emphasize that we women act with authority in our callings and in the ordinances we perform.  Also, our goals and purposes are the same as priesthood holders: we are in the business of saving souls. I didn't say it, but I don't know why women don't need to be ordained because we already do, for the most part, the same things as men.*

Like I said, the lesson went really well, better than expected. It was one of those times when I felt guided in what I said; it all came out more smoothly than I would have thought. I hope it inspires more women to go out and learn more about the priesthood, too, and I hope I'll continue to learn.

*My speculations are that according to some, as men thrive in hierarchies like the priesthood, it's a good way to get men to do what they're supposed to. Additionally, I've toyed around with the idea that women are loosely "called" to organize home and family on the earth and men are loosely "called" to organize churches on the earth, with a lot of overlap between the two. One time I looked up how many women organized churches throughout recorded history and of all the religions, I think two had been started by women, although I can't find the source right now.  I read Mormonism, Feminsm, and Being Snarky today, and that's pretty much how I feel about it all, too.
Posted by Emily at 10:01 PM 3 comments: Links to this post