What I learned from building a fence 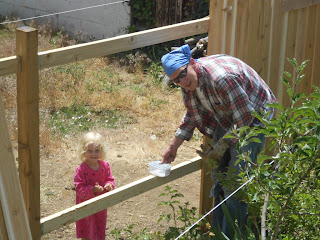 I've been thinking lately about the things we pass on to our kids.  I've typically been in the camp that we choose our actions/reactions, and it doesn't matter so much how we are raised.  However, I think I'm realizing how much example really does influence our children whether we know it or not.

For instance, if your parents were yellers, but you know it's not very nice and something you don't want to do, then you don't do it.  Right?  Maybe not.  I think people may not want to be yellers, but when it comes down to it, in certain situations, parents just don't know what to do, so they give in to yelling. Now luckily, yelling isn't one that I struggle with, nor did my parents, but it's easy for me to recognize and use as an example.

A difference I've noticed between my husband and me is our attitudes about work/manual labor.  I remember looking at work/service projects as fun -- you get to spend time together, talk, and get something done.  Of course it's not fun like going to an amusement park, but it feels good.  My husband, on the other hand, always kind of grumbled and overall just doesn't like it.

This last week while my husband, father, and father-in-law were working on building us a new fence (ours had blown over in our December freak wind storm), I think I learned a reason why my husband and I have such different attitudes about physical work.  While the guys were working away, I went outside to watch the progress.  Everything was taking longer than expected, and I asked, "Are we having fun yet?"  My dad responded with his normal, cheerful response and his obvious like of making things.  My father-in-law said something that made me realize this was a burden to him.  He commented that it's not fun now, but at least in the end we'd have something nice out of it.

"That's it!" I thought.  This was why my husband and I think so differently about work! His dad didn't like it, so he doesn't; my dad did like it, so I do (mostly).  I think that's a real generalization, but I do wonder how much of my husband's dislike of manual labor was passed to him from his father's attitude about it.  Would my husband like work more had his dad been more positive about it?  This really made me recognize that we probably do inadvertently pass on our attitudes to our children.

Now, I do recognize that maybe no matter how positive my husband's father could have been about work that my husband could still not like it, but I think that the chances of our children having a more positive attitude about it will be better when we are positive ourselves.

Another thing I realized during this fence project was that I really wanted to be out there helping, but between nursing a baby and caring for three other kids, it was pretty much impossible.  At first, I felt stuck inside doing "girl stuff" like making lunch and providing ice water.  Then I realized my job of providing food and water was just as important as the work they were doing; it was just different.  Then I realized, too, some people may actually prefer to be inside taking care of the kids and making the food rather than working on the fence.  So, it wasn't so much a "girl thing" versus a "boy thing", but a personal preference.  At this time, it just makes more sense for me to be inside nursing and my husband outside hauling around 60 lb. bags of cement.

You can see in the picture that our cute little girl was out helping by handing my husband the screws.  I hope she remembers that working together can be fun and that if she likes building fences, great, but sometimes she'll have to be taking care of her babies, she can build fences later.
Posted by Emily at 8:23 PM